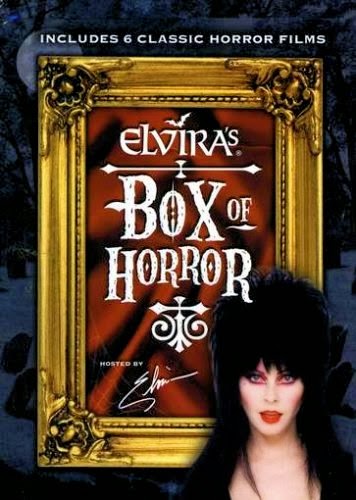 In 2004, horror movie hostess Elvira, Mistress of the Dark, proved that celluloid nightmares really can come true. Lying back on that familiar couch, the queen of schlock returned to show us her Box of Horror... and you wouldn't believe what it contained: a talking venus flytrap, an angry head, restless spirits, human organs, a killer's lethal weapon, and other ghastly surprises. Why, her whole box was filled with enough ghoulish goodies to raise the dead, rattle some bones, and feed an army of zombies! Released by TIME LIFE video, the films were initially issued as double features called Elvira's Horror Classics. These DVDs were also made available in one fine package called Elvira's Box of Horror, containing a total of six B-movie "clas-sicks," as Elvira likes to call them. That's six, count 'em, SIX glorious nights of just you, a bag of popcorn (don't forget the butter), and Elvira's Box of Horror... that is, unless you watch them as a double feature, then that would be THREE frightfully fun nights with Elvira! Orrr... if you don't have any house chores or a job, you can watch them all in one sitting and spend the looong entire night with the one and only Mistress of the Dark. What more could one ask for? Maybe a job to pay for these DVDs. Just sayin'.

Now, you may be asking "what about Elvira? Does she DO anything but lay on her couch? Does she PARTICIPATE?" Of course, silly sickies! Elvira introduces the flicks, makes recurring and enlightening comments (like, why are we watching this crap?), goes on dates with characters from the films, and kicks us out of her crypt after she's done. What a woman! Want to know more? The following double feature guide to the 3 DVDs contained in Elvira's Box of Horror reveals what kind of shenanigans you can expect from the iconic horror movie hostess.

1. House on Haunted Hill / Night of the Living Dead (1955 / 1968) While hosting the 1959 Vincent Price (Tower of London; Pit and the Pendulum) classic, Elvira introduces herself as "that DVDiva who gives the boys a feva," and throws an Elviraware Haunted House Party. Always looking to make a quick buck, everyone's favorite couch warmer tries to give us her best pitch while selling coffin-shaped Tupperware that screams when you open them. "Wouldn't you like to keep things, like food, flesh, and cadavers, fresh forever?" Included with the purchase, buyers also get an additional container, "that's ideal for storing a head of lettuce... or... a... severed head. Flies and maggots just can't get in." Despite throwing in 2 additional melon holders, Elvira has a difficult time selling her wares and resorts to threats. / Elvira proudly proclaims that she's "your hot horror honey who's in it for the money," as she gives George A. Romero's (Hungry Wives; The Crazies) ultimate zombie picture the class-B treatment. Having shown this film more often (throughout the decades) than any other flick, you have to believe her when she claims that this is her favorite horror movie of all time. (Remember back in the day when she used to promote Attack of the Killer Tomatoes as her all time favorite? Maybe, like a dress, she outgrew it for something a little more mature.) This time around, Elvira's "redneck family," who are actually made up from members of the main cast and zombies in the film, drop by to watch the picture with us. Observing the mess they are making, Elvira confesses to us, "now you know why I left home at the age of 3," and drinks six flaming zombies in order to get through the night. Later, never short on ideas for trimming down our oversized wallets, Elvira acts as a spokesmistress for the Adopt a Zombie Foundation. "Affiliated with the Inhumane Society," she assures us. What follows is a plea to give abandoned zombies a good home. "Forced to live in the wild, they roam in packs and forge for food," and "playful and rambunctious, zombies make wonderful pets. They're so affectionate, they'll follow you everywhere."

2. The Little Shop of Horrors / The Brain That Wouldn't Die (1960 / 1962) Labeled King of the Quickies, director Roger Corman (Swamp Women; Attack of the Crab Monsters) falls under the scrutiny of that sassy lassie, Elvira, who wonders if he has ever met her friend Wanda, Queen of the Quickies, "she can be made in two minutes!" During her research for the film, Elvira looks up the definition for "horticulture," but can't seem to find it listed under "WH." More movie insights from the Mistress of the Dark reveal that a very young Jack Nicholson (The Shining; Batman) has an s&m scene. "I just don't understand why anybody would be into s&m," she admits, "it sure beats the Hell out of me." Not surprisingly, Elvira likes to call this cheesy horror-comedy classic 'The Best Little Horror House in Hollywood.' "I said 'horror,'" she scolds us. "Get your mind outta the gutter, would ya? There's not enough room there for the both of us." In addition to lying about the couch... and her age... Elvira can't resist firing a series of puns at her viewers, like: "PLANT a kiss on the one you love and LEAF your cares behind." / Elvira is our cyber gal pal during the following picture from 1962 (although it was made in 1959). Armed with her very own laptop, Elvira answers her E-mail and receives a movie request from an adoring fan named Iggy, who also happens to reside in a mental institution. One would think this was an an Italian cannibal picture the way Elvira protests showing this mild atrocity, but our hostess with the mostess does give in, proving that flattery gets you everywhere. (My deepest apologies. Using the word 'flat' was probably not the wisest thing to say when referring to Elvira.) After showing the film, Elvira gets a surprise visit from her friend, The Head, who starred in the picture. Needless to say, the 'head' jokes are relentless.

3. Dementia 13 / Carnival of Souls (1963 / 1962) Ecstatic that she is finally allowed to show a film by an Academy Award-winning director, Francis Ford Coppola (The Godfather; Apocalypse Now), Elvira brags to viewers, "...here to fulfill your wishes because I am DVDelicious." That is, until she learns that the the film she's supposed to show is a B-movie from the early years of the director's career. Refusing to sit through the picture, Elvira gets an unmistakably threatening message placed on her lap. What's a horror hostess to do, but quote famous lines from Coppola's better known films and tell Godfather jokes. Later, the Mistress of the Dark is reunited with her old boyfriend, Billy, who starred in the film. However, they both seem to remember the past a little differently from one another. / Next, Elvira makes it perfectly clear to us that she's "not just some schlocky horror movie host," she's also an unlicensed psychologist. With that in mind, we, the viewers, are as lucky as the number on the previous movie title when we sit through a session between Elvira and her patient, Mary Henry, who happens to be the troubled leading lady in this terror-ific classic. Furthermore, Elvira has flashbacks about dating two of the male characters from the same flick. 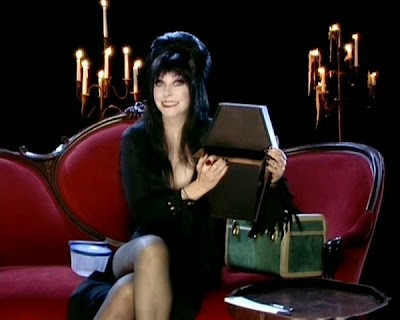 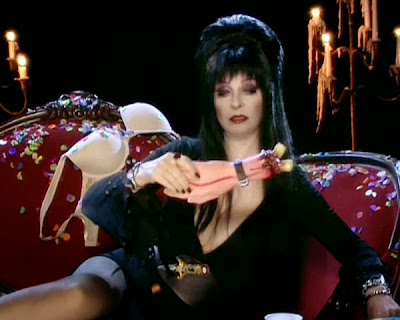 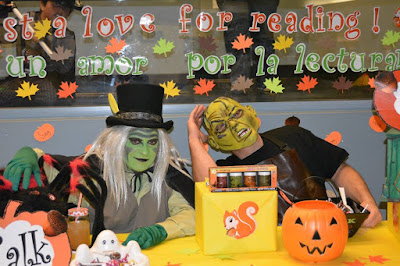